The head coach of Notre Dame, Jeff Jackson, has been at the helm for 18 seasons. He was a direct witness to a 6-1 Frozen Four semifinal rout at the hands of Denver in  April 2017. Denver went on to win the national championship under then-head coach Jim Montgomery.

The original formation of the National Collegiate Hockey Conference (NCHC) was expected to include the Fighting Irish but they opted for Hockey East instead. They’re now in the Big 10.

Notre Dame won the Big 10 regular season title in their first year in the conference – 2017-18. They have not won it since.

Expect to see plenty of Notre Dame fans at Magness Arena on Friday – there is a Notre Dame Club of Denver.  There are also Notre Dame Clubs in Vail and Northern Colorado. Even more amazing because ND has fewer than 9,000 undergraduates.

Notre Dame has a freshman named Michael Mastrodomenico. How do they fit his last name, 14 letters, on the nameplate on the back of his jersey? He ties the longest non-hyphenated name in all of hockey as of this writing with John Brackenborough (NHL), with 14.

The Irish will be wearing their navy road uniforms in Denver. Hockey helmets are gold but, unlike their football brethren, do not contain flakes of actual gold from the iconic Golden Dome. 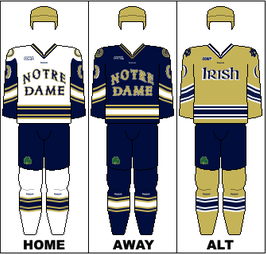 Despite a Top 10 rating (USA Hockey/USA Today) heading into the 2022-23 season, the #9 Irish are ranked behind #2 Minnesota and #6 Michigan in their own conference.

Don’t look for Notre Dame’s mascot, a leprechaun. He is in Las Vegas for the Notre Dame-BYU Shamrock Series matchup at Allegiant Stadium (nothing like Catholics vs Mormons in Sin City!). Before the leprechaun, Irish terrier dogs represented the school. In 1960, the idea of a cheering leprechaun was introduced. By 1965, it was the official mascot.

People may remember the football rivalry Catholics vs Convicts (Notre Dame vs Miami). There is a similar rivalry on ice. The Holy War on Ice refers to the college ice hockey series between Boston College and Notre Dame.

LetsGoDU is not affiliated with the University of Denver or the DU Athletic Department. All ideas, comments and opinions reflect the views of the authors.